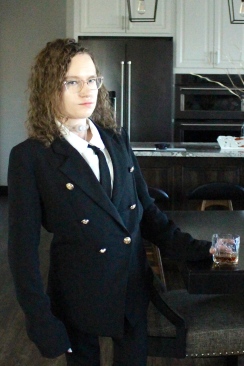 When picking a second Gossip Girl character for an outfit re-creation, my mind immediately went to Chuck Bass. Yes, not Serena, nor Jenny, nor Lilly, Chuck Bass. Men’s wear inspired looks have been particularly big this fall, and I happened to have a lot of posh men’s wear inspired items already.  The key pieces I used for this look are a double-breasted blazer, button down shirt with a bow tie, and oxford shoes. The shirt and tie I have are meant to be tied in a pussy-bow (see item link), but I learned how to tie a windsor knot just for this look. Since Chuck is known for drinking scotch, I thought I’d pose with a glass of whiskey (my brown liquor of choice) to really help “set the scene” as it were.